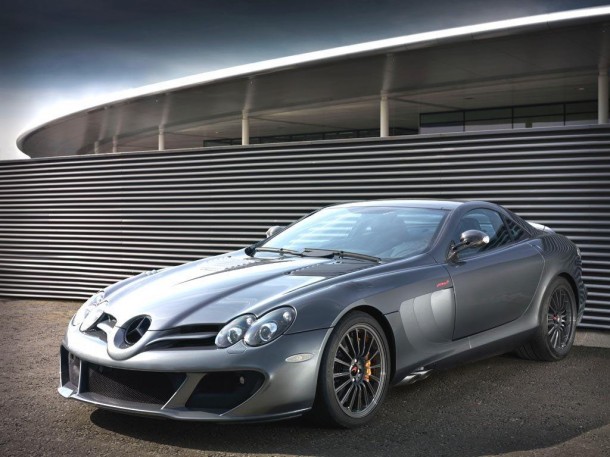 The Mercedes-Benz SLR McLaren was discontinued a year ago, when the German automaker and British racing specialist decided to part ways.  Mercedes has since released the SLS AMG, and McLaren has its new MP4-12C.  But it looks like McLaren has one last ace up its sleeve for the old supercar.

The new SLR McLaren Edition sports revised bodywork (front bumper, grille, hood, side gills, rear diffuser, rims) and interior parts, along with upgraded steering and suspension components and new ceramic brakes.  The 5.5L supercharged V8 appears to have been left untouched and is expected to deliver 626 hp, 575 lb-ft of torque, 207 mph top speed, and a 0-62 mph run in under 3.8 seconds.

In line with its name, the limited-edition car’s Mercedes badges have been given a smoked finish to blend in with the rest of the car, while the McLaren badges are highlighted in red.  The company plans to build just 25 examples of the McLaren Edition, which it showed off recently at the Essen Motor Show in Germany.  No word on pricing or availability, though we’d imagine they’re probably all spoken for already.

More photos and a walkaround video after the jump.

Bad Behavior has blocked 387 access attempts in the last 7 days.